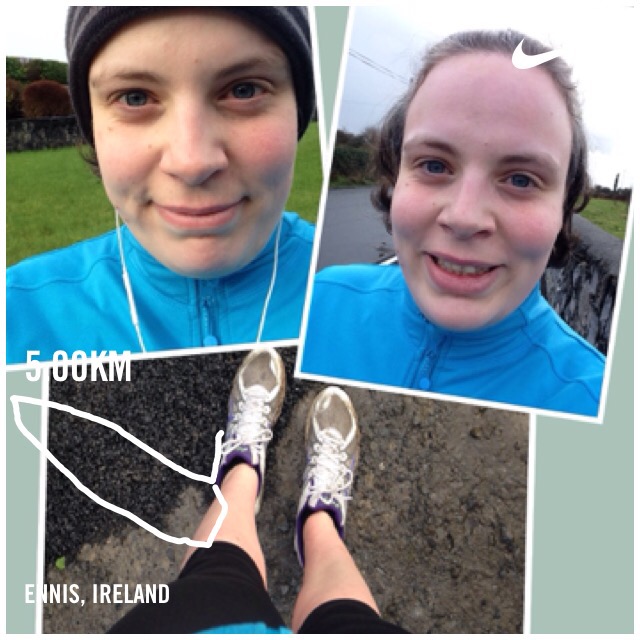 Yesterday was Race Day, for the 5k Resolution Run in Ennis, the first part of the RunClare 2016 series.

We got up as always when our two daughters decided it was time, which happened to be pretty much the same time as my alarm at 7:30. I had been pondering all week what exactly to eat for breakfast, because my stomach can sometimes be a bit temperamental, but I decided to go with tried and trusted. Between 8 and 9, I had 2 wholegrain bagels, one with creme cheese and cucumber and the other with honey and peanut butter.

We left home shortly after because we expected traffic to be a bit worse than it ended up being. On the drive, we had really bad weather, wind, rain and hail. Right then I was really dreading having to run 5km. We ended up getting to the Lee’s Road complex at 9:45, so over an hour before the whole thing was meant to kick off. Registration went entirely smoothly and me and Liana did a few little warm up exercises in between rain and hail showers.

When it was time to go down to the starting line, the weather thankfully cleared up a little and during the whole run it one drizzled a little for about 4 minutes. The first 2 km of the course are on a country road and go up and down quite a bit. I realized very soon after the start that I had made a mistake with the first song in my race playlist, the bpm didn’t’ match up with my cadence at all. This meant I had a bit of a problem to settle into a good rhythm the first 3 or so minutes. I know I could have just changed the song, but I cut my playlist very short and then I would not have had a song for the last 500m.

The next stretch of the run was a steady incline for probably about 800m or so, after which the course evened out a bit. That part of the run really zapped my energy, but I managed to still keep my cadence up to the 155bpm that my songs were. At about km 3.5 I walked for about 10 seconds, because my head decided I had enough, but after a little mental butt kicking, I started running again. The last 500m towards the finish line was an incline (again) and I really tried to sprint, even just a little, but there wasn’t much left inside me anymore.

The whole run I was convinced I was much slower than my only other 5k race on the same course on Halloween last year, because I felt worse. I can’t quite explain it, but this race just didn’t quite click with me. It turns out though, that I actually ran a little faster than last time. I am not sure of the exact chip time yet, but the gun time so far is 38:33 (5 secs faster) and my app time is 38:10. Right now I am keeping my fingers crossed that I might potentially even come in under 38 mins. I’ll update here once I have the chip time.

There were two official pictures taken of me running towards the finish line and looking at them I have to admit that I absolutely hate the way I look. Since I saw them, I have debated whether or not to post the on this blog, but then I realized, this is exactly what this place is for, confronting the truth about what I look like and working hard to change myself.

On a more positive note, I was really impressed with myself, because Stephen went out on Saturday right after the race and got himself some McDonalds and even though he offered to get me some (more than once) I was very good and instead had some wholegrain pasta with a garlic cheese sauce at home. I know that isn’t the world’s healthiest meal either, but I felt like I deserved it after the run.

Looking forward to seeing tomorrow if the effort of this past week has shown any results already, even though I know that it will be slow going.

Anybody out there ever run a race that really didn’t feel right, and in the end the result was still alright? Anything I should do apart from going back out running on Tuesday?

This is my first post on this, my brand new blog.

Who am I and what will I be writing about? Well, I’m glad you asked. My name is Sandra, and I am about to turn 29 at the end of next month. With that of course also comes that I will be turning 30 in just a little over a year. Since New Year’s, I have been pondering what I would like to accomplish by the time I turn 30, and the biggest thing is: I want to be fit! Basically, I want to leave my 20s in better shape than I entered them.

Right now, I wouldn’t say I am in terrible shape, especially considering I have had two children (November `11 and August `15) but I have been carrying some extra weight with me for as long as I can remember. When I stepped onto the scales for the first time this year, and it showed triple digits (in kg) it was a bit of a shock. Instead of it sending me to the cupboard to eat some more of the leftover Christmas chocolate to make me feel better, it instead led me to search for a commitment to change my life for the better.

Good thing that I had already signed up to the RunClare series, which is 4 races between January 30th and April 10th with increasing distances of 5k, 5 Mile, 10k and 10 Mile, all taking place in County Clare in the west in Ireland. So I knew right away that I would have no other choice but to run at least twice every week to build up my stamina. Really by now I am looking at the 10 Mile run on April 10th and have a plan to increase the distance of my long run every Sunday, until I am ready to go the whole distance.

I have no illusions that I will win or even rank highly in any of these runs, however my main goal is to continuously run the entire distance this time around. Maybe next year I will be a little more ambitious with my times.

In addition to the run training, I have last week been gifted the programme to the Bikini Body GuideBikini Body Guide (BBG) by Kayla Itsines, and from what I can see on Instagram, that programme seems to have some awesome results. Because of my running training, I will only do her strength and stretching exercises for the moment and take it as far as the 12 weeks bring me. Right now, I have done both the leg and the arm/abs workout of Week 1 (and have the sore muscles to prove it), but I will skip the optional workout, in favour of a rest day tomorrow ahead of my 5k race on Saturday.

To cut to the chase, with this blog I am committing to getting my BMI into the healthy zone (which should mean a loss of about 25kg), to improve my eating and to improve my fitness all latest by the time I turn 30. For accountability, I will share weekly updates on every aspect of my journey.